The studio Barreau et Charbonnet and Metalobil present: AT THE FONTEVRAUD ABBEY, FRANCE

Nantes, May 2016  – From the 4th of  June until the 4th of November 2016, the festival ‘La Cîté idéale’ is taking place in France at the Royal Abbey of Fontevraud. The theme: BUILDING AND LIVING the ideal city, invited 5 studios, collectives or associations to explore the intimate relationship between man and architecture.

The studio Barreau et Charbonnet and Metalobil are fortunate to be one of them. The two young designers based in France in Nantes will propose a temporary instal- lation in co-creation with Metalobil ‘which takes place as a free spirit in the fields of environmental design, layout, scenography, furniture and graphic engineering’ in the Roman kitchen.

Its this festive background that inspired the installation Pi 5. Located in one of the master rooms of the abbey restored by the architect Lucien Magne (the last architect of the Sacré Coeur in Paris) the installation follows also the original architecture of this ‘returned’  kitchen.

Nicolas Barreau, co-founder of the studio Barreau et Charbonnet adds: “ The exter- nal structure made us think of hanging udders, and with the context of the ideal city of Roman architecture, we linked immediately to Rome, and the “ built “ city by Romulus and Remus often represented sucking the udders of the wolf.”

Freddy Bernard, co-founder of Metalobil, adds: ‘ This space functions like a fireplace that takes the ideas out of our minds and leads us to imagine a thousand other uses as the original smokehouse. We could have imagined a Turkish bath, a giant still, a medieval astronomical telescope with 6 optics, five huge fish tails of the former Loire. But as strong young men, we preferred to mention that which revolves around the “saints”… and their moods.’.

The size, the location and the effect made by the 5 suspended volumes makes the installation really impressive. The inner structure of the udders has a wood frame- work and the outer skin covering the vessels are pine shingles. Shingles resemble tiles and give an effect of dragon scales. The tip of the udders of the wolf is repre- sented by a calf teat normally used by farmers.

The abbey being located in the Saumur vineyards, it’s wine that visitors will enjoy. All the udders measure 6m high and offer red wine, white wine, rosé wine, water or local apple juice.

The ambition of the team was to propose a moment of conviviality, sharing, love and humour. 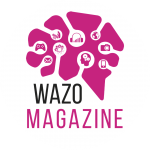